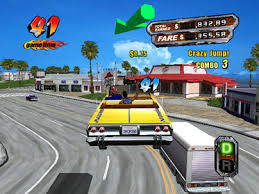 “Set your goals high , and don’t stop till you get there”

Those are wise words Bo Jackson. I wholeheartedly support them. Goals are important. For there is after all nothing sadder than a goal that is missed. As a young whippersnapper I had a goal. A dream if you will. I dreamed of world where I would be able to complete a full lap on Crazy Taxi arcade mode.

Many, many, many an hour I spent labouring on this Herculean task racking up hundreds of thousands of pounds of virtual property damage and many a time I came close. But success always eluded me. The game conspired against me, its virtual denizens stabbed me in the back time and time again. Time passed and with weary heart I set aside my goal of Crazy Taxi completion. I abandoned my dreams and instead focused on trifling matters such as exams and drinking.

My goal escaped me but now I have been offered a second chance technology has marched forward and delivered onto my Kindle Crazy Taxi. Now I vow to thee that a train, bus ride or spare moment will not pass until my goal of completing a full lap has been achieved or my Kindle has been smashed into a million tiny little pieces in a fit of righteous rage.

One of the peculiar aspects of the British national identity is that it is so hard to pin down into something that a majority of Brits would accept as being true. Unlike other countries there is no ‘Britain Day’ in which all things British are celebrated and cliches like the ‘stiff upper lip’ probably haven’t been true for many a decade (If you don’t believe me look at reality tv). How then can Britishness by identified. I believe the following story I am going to tell you gets to the heart of the matter better than many other things I have read.

Ever since George Orwell’s novel 1984 was published in  1949 the idea of ‘Big Brother’ watching us has entered into the English speaking world’s lexicon. The idea of a totalitarian government harnessing technology to spy and invade people’s lives has spawned countless films and novels. The issues of government spying and intrusion into the lives and emails of people has of course touched the political sphere. See for example the debate and discussion over Edward Snowden and his revelations into the extent of US surveillance of other citizens and world leaders.

Indeed perhaps the great fear of the zeitgeist is the loss of privacy coupled with debate over whether anyone cares about privacy anymore. I afterall am blogging theoretically to anyone with a computer. Millions and millions of people post details of their life on social networks. Millions of us use twitter to provide real time locations and narration of our lives. Privacy surely is dead.

It was with great amusement then that I read about long established (running from 1937 to the 1950s and restarted in the 80s) ‘Mass Observation’ project in Britain. This is a project which seeks to record Britain by recruiting ordinary people themselves to provide detailed observations on their daily lives. In the ‘Mass Observation’ archives there are reams and reams of information going back decades on all manner of things. Although if I had to guess it wouldn’t be dissimilar to things posted online today (there is probably even drawings of dancing cats). In many countries around the world this ‘Mass Observation’ project would generate hysteria and conspiracy theories. In Britain it has generated a BBC website article about the ten most interesting things we have learnt from the project. For example in the 1980s people struggled to spell Bob Geldolf’s name correctly or “the average time taken to drink half a pint of beer in pubs on a November Saturday night in Brighton in 1938 was 7.3 minutes”.

You see Big Brother has existed since before the war in Britain and public and private life has continued without thought or debate over the possibly Orwellian consequences of our actions. There is something uniquely British about this.

The BBC article in question can be found here http://www.bbc.co.uk/news/magazine-24957664

Don’t worry the sky is not literally falling. Or if it is that isn’t what I’m writing about. No I’m writing about the news that leaked out on a frantic weekend of 1st round FA cup football and league fixtures that Sky and ITV will no longer have the rights to show champions league and europa league football from 2015 onwards.

BT sport apparently wiped out the bid from sky by paying an eye watering £897 million for exclusive three year rights. I know BT sports already air the FA cup and some premier league games but this was for me was not only a statement of intent but a portent of things to come. It showed that that unlike the short lived Setanta Sports, or even ESPN, that BT mean serious business.

A quick google search suggests that as of June 2013 sky had 10,459,000 customers in total. Some these like myself may only be basic subscribers but for many the huge draw of Sky is the sports package. Unlike countries such as the US where a large quantity of providers compete to show sports since the dawn of Premier League football Sky worked towards and almost achieved a monopoly on sport. If you want to watch league football. Sky was the only choice and in other sports Sky were (and for the moment still are) the biggest providers in town. England rugby autumn tests are on sky. 2 out of the four golf majors are exclusively on sky as is the ryder cup. Ashes cricket and indeed all England cricket is on sky. In short Sky knows that sport sells and it made sure that it was the biggest provider in town.

This sporting dominance was compounded by use of financial muscle to dominant the TV movie market as well. Sky brought the rights to show box office films at a premium once again ensuring that it was the biggest player in town. Now though like in sport this dominance is under attack services like netflix and lovefilm are bidding for the rights to show these films as well. The day is probably not far off, if it has not already arrived, where Sky isn’t able to show the release of the new James Bond or Marvel Superhero film first as some else secured these rights already.

The underlying driving force behind these moves is the growth of the web as in becomes the key medium whereby tv programmes are delivered to our homes. Companies like netflix or BT seeking to use the internet to change the way television is consumed. Whether or not these specific companies win is irrelevant the merging of the tv and internet is inevitable. As this merger occurs however prices will drop for consumers and at the very least Sky’s profit margin will come under strain. Sky of course have already begun to anticipate this shift with its move into the ISP markets. For once though Sky will not be able to overwhelm its rivals with its financial muscle. I don’t know how many people will be Sky subscribers in the UK in 2015 but with the rises in the cost of living being what they are and the news of content loss today I’ll bet it is not anywhere near the levels it is today.