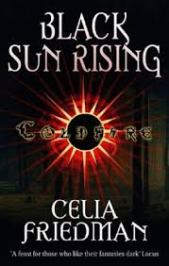 ‘Black Sun Rising’ is stuffed full with great ideas and fascinating set pieces. Unfortunately though, the book as a whole seems less than the sum of its parts.

The best bit of this book is the central premise/world building which is (and I don’t use this word lightly) awesome.  Humanity set out to colonize the new world of Erna but this world reacted in a way nobody could imagine. It shaped itself to humanity’s fears giving life to the creatures of our darkest nightmares. Essentially the metaphysical is made terrifyingly real.

To survive on Erna humanity was forced to destroy its advanced technology and fight back against world in which life was constantly adapting to kill humans. One human ‘the prophet’ led humanity in the battle to impose mastery on the world but as triumph near he fell into darkness and evil.

It is at his fall into darkness that the cold open begins and right from the off this book had my attention. I’m not going to spoil it but it was a bold beginning. Let’s just say the prophet crosses the moral rubicon in an ‘extreme’ way in the pursuit of immortality. It was the sort of scene that you would typically find in a Joe Abercrombie novel and I’m all in favour of that.

If anything though this opening reveals the weakness of the novel. I wanted the same level of ruthless brutality had be kept up throughout. At times the novel did move towards this but for long stretches it fell into the sort of fantasy travelog writing that is so difficult to do well.

Added to this is the feeling that the character development is a bit rushed. Relationships blossom a bit too quickly so the payoffs don’t match the supposed stakes. In particular Damien’s love for Ciani would have been more believable had he paid a professional cost for the initial relationship and the subsequent adventure.

It’s hinted early on that the elements of the Church do not like him because uses healing magic and they certainly don’t like Ciani who uses any and all magic. If he had been forced to turn his back on the church to save Ciani this would have added extra emotional depth to his story. In particular, it would have added an extra layer of complexity to his relationship with ‘The Hunter’ and an extra facet to Damien’s rather straight laced personality.

Reading those previous paragraphs back  I feel that I have come across as harder on the book than I would have perhaps wanted. I enjoyed this book much more than the tone of this review might suggest. However, I stand by my views because I really loved the central premise and characters of the story. The ingredients were there for something really special but the souffle didn’t quite rise as it should have. I’d give this 3.5 out of 5. I’m eager to see where the next two books of the series go.