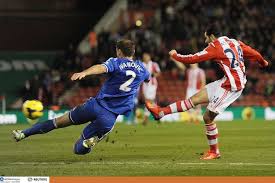 If there is such a thing a karma Chelsea got a big fat dose of it on Saturday.

Drawing 2-2 against Stoke at the Britannia and pressing for the win Chelsea instead found themselves defending against a Stoke counter attack.

Stephen Ireland passed the ball out to Oussama Assaidi who wrong footed Branislav Ivanovic cutting inside and curling the ball into the top corner of the net. Que ecstatic celebrations in the crowd and manadtory booking for Assaidi taking his shirt off.

What makes this karma rather than just another upset in a Premier League season of upsets. Oussama Assaidi is on loan from Liverpool. Without playing Chelsea Brendan Roger’s boys just denied Chelsea at least a point.

This is karma for Chelsea because, they have made something of a speciality in recent years of loaning out unwanted squad players to get them game time.

At the moment Chelsea have got Victor Moses on loan at Liverpool, Romelue Lukaku on loan at Everton, Oriol Romeu on loan at Valencia, Marko Marin on loan at Sevilla, Thibaut Courtois

on loan at Athletico Madrid and a whole host of players on loan at Vitesse Arnhem who are now two points clear at the top of the Dutch Eredivisie. This of course isn’t counting the whole host of youngsters Chelsea have on loan in the Championship.

Chelsea of course are not the only team to loan out players witness Liverpool’s Assaidi scoring against them. They are however, perhaps the most egregious example.

Well these loan signings are having a huge effect on the top European leagues and competitions.

Take for example Everton flying high in the Premier League. This success is fuelled in large part by the loan signings of Gareth Barry from Manchester City, Romelu Lukaku from Chelsea and Gerard Delefeu from Barcelona. These aren’t Everton players they are players from other top division teams being loaned out.

It was one thing when youngsters were being loaned out to clubs in the lower leagues. This had a distorting effect on competition but, these were players looking to get some first team experience. Now however, clubs are loaning out first team players they don’t need or want to teams in the same division so that these players can help take points off rivals. This needs to stop before it gets out of hand.